An occasional look at the lower
reaches of cricket. 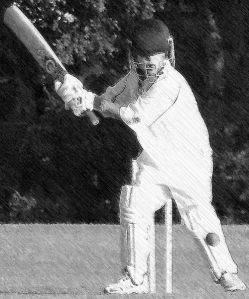 ‘Hi Rich, great to hear from you.’ Andy is an honest bloke and he is pleased to receive a phone call from Richard. He is also aware that a call from Richard on a Monday evening might be THE CALL, the one that includes him in the All Stars line up on Wednesday.
‘Oh, hello Andy, everything ok with you?’
‘Yes, great!’ Andy hopes that he sounds enthusiastic enough. ‘Was it about cricket?’
Richard stumbles. This was always going to be difficult. ‘Er, yes, but it was really, um, Tom I was after.’

No man has a greater disappointment in life than finding that his teenage son has jumped ahead of him in the reckoning for a place in his cricket team while he wasn’t looking. All pride at having raised such a prodigy is drowned in a sea of depression. You didn’t nurture and encourage the brat for this! What sort of gratitude is this for all the hours of practicing leg-breaks on the beach?

The truth is Andy only has himself to blame. Was it not he who offered Tom as a substitute when domestic matters kept him away from the crease? Was it not Andy who caused Richard to be run out only two weeks ago? No right-thinking man runs out the chairman of selectors.

The real reason for Tom’s call to the colours was to be found in last week’s match, one in which the All Stars were comprehensively beaten. Ground Into Dust. Thrashed. Smashed. Chewed Up And Spat Out. The cause of this mayhem was one Alvin, all fourteen years and three months of him. It is not uncommon for a young son (or, in very exceptional cases, a suitable daughter) to make up the numbers for either side. The bowling is usually generous to take account of youthful inexperience in a man’s game, and the youngsters are required to be grateful and deferential in appropriate degrees. Not so with Alvin. One short of the eleven expected, we happily accepted the opposing captain’s proposal that the fresh-faced youth be included in his team. In response to this Alvin bowled and fielded with such athletic ability (and, let it be said, with some luck) that the All Stars were dismissed both quickly and cheaply. A couple of quick wickets then brought him to the crease, not as any other player might be, in off-grey flannels and a shirt snatched half-cooked from the tumble drier, but fully kitted out in pristine whites and a helmet.

OK. If he wanted serious, then serious he would get. No quarter would be given, no allowance for youth, no gentle looseners. Full bore right from the start. The only ball he did not smite to the boundary was the one that struck the square leg umpire, who by lucky chance was his father.

Up until last week the All Stars’ youth policy had been based on a twin-track approach. The first of these reached the end of the line when the long-limbed Martin, he of the wickedly fast swinging off-break, had chosen work instead of studies and moved to London. The second strand of the policy had been to regularly select David, easily the oldest member of the squad, in order that the rest of us might feel younger when standing beside him. After Alvin’s exploits a new solution beckoned. The All Stars must have their own tyro! Come in Tom, your hour has come.

In the event it turned out that dear Andy had taught his son all too well. The skipper run out in the first over. Callow youth.